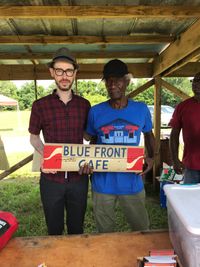 Jimmy "Duck" Holmes is a Grammy-nominated American blues musician and the proprietor of the Blue Front Cafe, which is the oldest surviving juke joint in the United States. Holmes is known as the last of the Bentonia bluesmen, as he is the only remaining local musician to play in this unique regional style. Like his predecessors Skip James and Jack Owens, Holmes learned to play from Henry Stuckey, the originator of the tradition.

The Bentonia blues is based in the "cross-note" minor tuning, which is known for its haunting, ethereal, rhythmic, and hypnotic qualities. Holmes' latest album, Cypress Grove, was produced and released by Dan Auerbach of the Black Keys. The album earned Holmes a Grammy nomination this year.

Holmes' music has been praised by fans and critics who have called it: "addictive" and "obsession worthy," "as gritty, stark and raw as one could imagine," and "absolutely hypnotic." He is truly a singular voice in all of American music.

For six years, Crosby toured Europe annually, developing his sound before making the pilgrimage to Mississippi to meet Jimmy “Duck” Holmes in 2019. Since that first meeting, Crosby has returned to Bentonia four times to learn about the style directly from Holmes at the Blue Front Cafe and to perform at the Bentonia Blues Festival. Crosby recently recorded a new album, Winter Hill Blues, with renowned producer Bruce Watson (Fat Possum/Big Legal Mess Records) at his Memphis studio, Delta-Sonic Sound.

Through music, Crosby hopes to inspire peace, openness, and respect for tradition, for culture, for each other, and for one’s self.

From an early age growing up in the south of England, Shaun Marsh learned the power and potential of music through his mother, a performing artist and soul singer in the sixties and seventies. Being introduced to early pop, rock & roll, R&B, and soul had a profound inspiration on him. It wasn’t until he reached his forties that Shaun began to look back at the origins and true roots of the music that he’d been listening to most of his life.

Late one night while tuning in to John Peel on the radio, he heard Hell Hound On My Trail by Robert Johnson. The raw emotion of that recording compelled him to immerse himself in the early pre-war blues. He began to develop the techniques for playing finger picking-style country and Delta blues from the recordings of the early pioneering musicians who paved the way. It was these rich and lonesome strands of storytelling that brought him to Memphis, where he continues to study in the shadow of this powerful music that defines this city. His repertoire on solo acoustic guitar ranges from Robert Johnson and Charley Patton to Skip James and Big Bill Broonzy. Following the threads of the blues from Memphis, he also gets inspiration from such greats as Johnny Cash, Magic Sam, and Otis Redding.